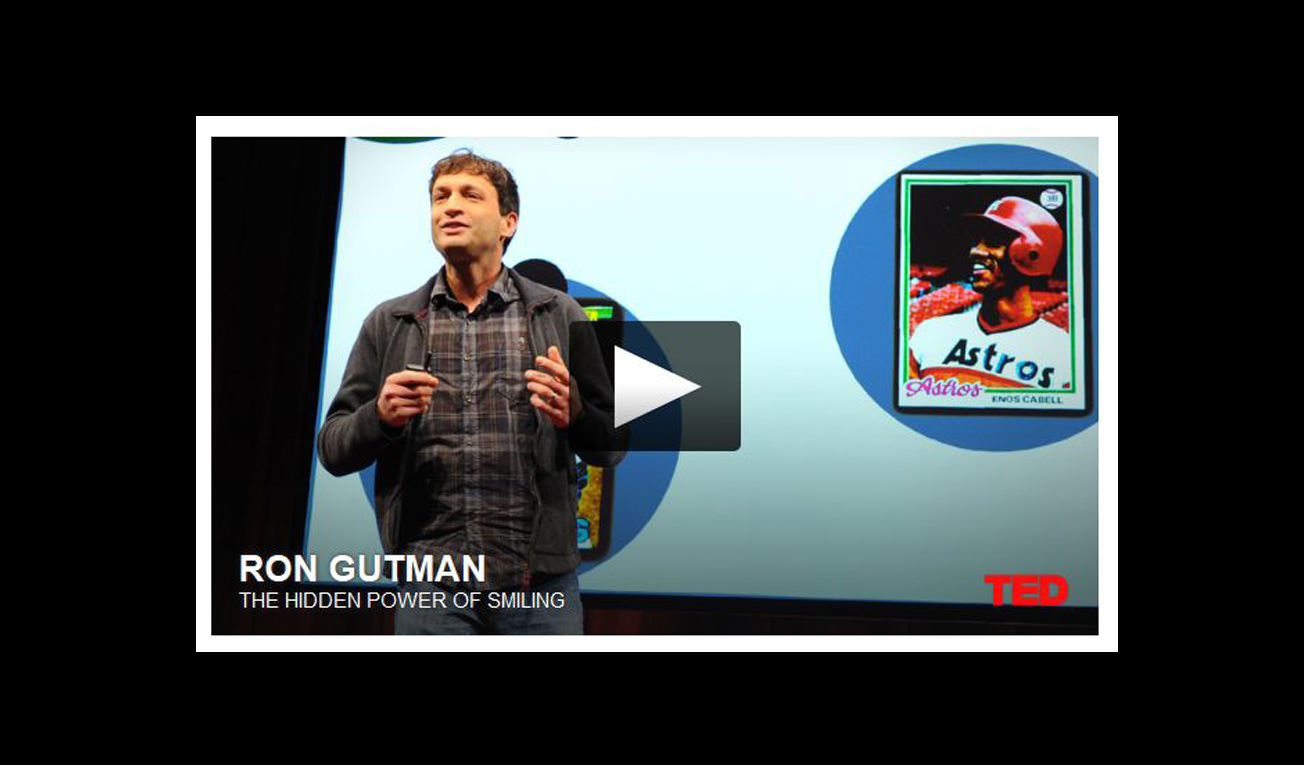 This incredible TEDTalk will change everything you ever knew about smiling!  TEDTalk’s feature some of the most interesting scientists, doctors, business owners, inventors, and teachers.  Remember to smile as much as possible!  If you have any problems with your smile, let us know, and we can help you find the beautiful smile to last a lifetime.

This video presents some amazing studies.  Did you know that more than a third of us smile more than 20 times per day, whereas less than 14 percent of us smile less than five. In fact, those with the most amazing superpowers are actually children, who smile as many as 400 times per day.”  It makes you question why we smile so much less as adults.  How many times have you smiled today?

One of our favorite quotes from the video –

“Smiling is one of the most basic, biologically-uniform expressions of all humans.”

Below is the transcript if you would rather read, or don’t have audio available..

0:11
When I was a child, I always wanted to be a superhero. I wanted to save the world and then make everyone happy. But I knew that I’d need superpowers to make my dreams come true. So I used to embark on these imaginary journeys to find intergalactic objects from planet Krypton, which was a lot of fun, but didn’t get much result. When I grew up and realized that science fiction was not a good source for superpowers, I decided instead to embark on a journey of real science, to find a more useful truth.
0:41
I started my journey in California with a UC Berkeley 30-year longitudinal study that examined the photos of students in an old yearbook and tried to measure their success and well-being throughout their life. By measuring their student smiles, researchers were able to predict how fulfilling and long-lasting a subject’s marriage will be, how well she would score on standardized tests of well-being and how inspiring she would be to others. In another yearbook, I stumbled upon Barry Obama’s picture. When I first saw his picture, I thought that these superpowers came from his super collar. But now I know it was all in his smile.
1:24
Another aha! moment came from a 2010 Wayne State University research project that looked into pre-1950s baseball cards of Major League players. The researchers found that the span of a player’s smile could actually predict the span of his life. Players who didn’t smile in their pictures lived an average of only 72.9 years, where players with beaming smiles lived an average of almost 80 years.
1:52
(Laughter)
1:54
The good news is that we’re actually born smiling. Using 3D ultrasound technology, we can now see that developing babies appear to smile, even in the womb. When they’re born, babies continue to smile — initially, mostly in their sleep. And even blind babies smile to the sound of the human voice. Smiling is one of the most basic, biologically-uniform expressions of all humans.
2:20
In studies conducted in Papua New Guinea, Paul Ekman, the world’s most renowned researcher on facial expressions, found that even members of the Fore tribe, who were completely disconnected from Western culture, and also known for their unusual cannibalism rituals, attributed smiles to descriptions of situations the same way you and I would. So from Papua New Guinea to Hollywood all the way to modern art in Beijing, we smile often, and you smile to express joy and satisfaction.
2:56
How many people here in this room smile more than 20 times per day? Raise your hand if you do. Oh, wow. Outside of this room, more than a third of us smile more than 20 times per day, whereas less than 14 percent of us smile less than five. In fact, those with the most amazing superpowers are actually children, who smile as many as 400 times per day.
3:22
Have you ever wondered why being around children who smile so frequently makes you smile very often? A recent study at Uppsala University in Sweden found that it’s very difficult to frown when looking at someone who smiles. You ask, why? Because smiling is evolutionarily contagious, and it suppresses the control we usually have on our facial muscles. Mimicking a smile and experiencing it physically help us understand whether our smile is fake or real, so we can understand the emotional state of the smiler.
3:58
In a recent mimicking study at the University of Clermont-Ferrand in France, subjects were asked to determine whether a smile was real or fake while holding a pencil in their mouth to repress smiling muscles. Without the pencil, subjects were excellent judges, but with the pencil in their mouth — when they could not mimic the smile they saw — their judgment was impaired.
4:21
(Laughter)
4:23
In addition to theorizing on evolution in “The Origin of Species,” Charles Darwin also wrote the facial feedback response theory. His theory states that the act of smiling itself actually makes us feel better — rather than smiling being merely a result of feeling good. In his study, Darwin actually cited a French neurologist, Guillaume Duchenne, who used electric jolts to facial muscles to induce and stimulate smiles. Please, don’t try this at home.
4:52
(Laughter)
4:54
In a related German study, researchers used fMRI imaging to measure brain activity before and after injecting Botox to suppress smiling muscles. The finding supported Darwin’s theory by showing that facial feedback modifies the neural processing of emotional content in the brain in a way that helps us feel better when we smile. Smiling stimulates our brain reward mechanism in a way that even chocolate — a well-regarded pleasure inducer — cannot match.
5:27
British researchers found that one smile can generate the same level of brain stimulation as up to 2,000 bars of chocolate. (Laughter) Wait. The same study found that smiling is as stimulating as receiving up to 16,000 pounds Sterling in cash. That’s like 25 grand a smile. It’s not bad. And think about it this way: 25,000 times 400 — quite a few kids out there feel like Mark Zuckerberg every day.
6:01
And, unlike lots of chocolate, lots of smiling can actually make you healthier. Smiling can help reduce the level of stress-enhancing hormones like cortisol, adrenaline and dopamine, increase the level of mood-enhancing hormones like endorphin and reduce overall blood pressure.
6:19
And if that’s not enough, smiling can actually make you look good in the eyes of others. A recent study at Penn State University found that when you smile, you don’t only appear to be more likable and courteous, but you actually appear to be more competent.
6:36
So whenever you want to look great and competent, reduce your stress or improve your marriage, or feel as if you just had a whole stack of high-quality chocolate — without incurring the caloric cost — or as if you found 25 grand in a pocket of an old jacket you hadn’t worn for ages, or whenever you want to tap into a superpower that will help you and everyone around you live a longer, healthier, happier life, smile.
7:05
(Applause)

Sundays on the Terrace at Orfila in Escondido

Is chewing gum bad for your teeth?